Cllr Janet Blake of Buckinghamshire County Council has confirmed that local authorities in the East West Rail Consortium will contribute £45m to the scheme to re-instate a railway for passenger services between Bedford and Oxford, Milton Keynes and Aylesbury and beyond.

The commitment was given in a letter presented to the Under-Secretary of State for Transport Stephen Hammond MP at a VIP event hosted by the East West Rail Consortium and the All Party Parliamentary Group for East West Rail, held at the Institution of Civil Engineers on Monday 11th November.

In July 2012, the Department for Transport announced its support and funding for the Consortium’s proposal to upgrade and re-open sections of the former ‘Varsity Line’ between Bedford and Oxford, Milton Keynes and Aylesbury in its 2014 to 2019 five year-spending plan. A condition of funding was that there must be a local financial contribution to the scheme.

“Members of the East West Rail Consortium have worked single-mindedly to establish a robust business case for the re-instatement of an east-west rail link to improve transport connections within the region and nationally.

“Our investment in East West Rail, when all local authority budgets are under such pressure, demonstrates the importance of this scheme and our confidence in the substantial economic, social and environmental benefits it will bring.”

Through independent economic assessment by Oxford Economics the Western section of East West Rail was forecast to generate some 12,000 new jobs and boost the regional GDP by £38m per annum.

The Under-Secretary of State for Transport, Stephen Hammond MP said:

“There is no doubt that East West Rail will bring many benefits for people living and working in the region it will serve. But this is also a scheme of national importance that will form part of the national strategic infrastructure. More and more people are travelling by rail and we need the additional capacity and opportunities for more and different journeys to be made by rail.”

The event was attended by an invited audience of MPs, councillors, business leaders and senior rail industry representatives.

Iain Stewart, MP for Milton Keynes South and Chair of the All Party Parliamentary Group, stressed the importance of East West Rail as a catalyst for economic growth and job creation, as well as reducing road congestion. “By joining Oxford, the science parks, Milton Keynes, Bedford and beyond, you’re connecting the nerve centres of the British economy, the places that will keep our economy growing. East West Rail is unlocking this enormous potential and making the whole region more attractive for inward investment from the UK and abroad.” 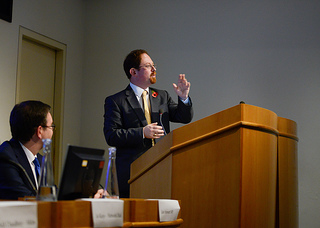 Julian Huppert, MP for Cambridge and Deputy Chair of the APPG, said the development of the Western section was excellent news but that realising the full vision for East West Rail was the most exciting prospect, providing a rail link all the way from East Anglia, through Cambridgeshire, Bedfordshire and Buckinghamshire for the first time.

Jo Kaye, Director at Strategy and Planning at Network Rail, told guests about progress to date on the Oxford to Bicester section of the East West Rail and spoke of Network Rail’s commitment to develop the scheme from Bicester to Bedford for the services proposed by the East West Rail Consortium and to incorporate the further enhancements proposed by the Department for Transport to ensure the scheme would deliver long-term benefits.

Adil Chaudhrey, Project Director at Atkins, explained the work that Atkins are currently undertaking on behalf of the East West Rail Consortium will identify the economic benefits that may be derived from improved infrastructure and transport links in the region. This will form a foundation for subsequent work to develop a business case for the extension of the East West Rail line east of Bedford.

Caryl Jones, Communications Manager for the East West Rail Consortium on 07785 927210 or caryl.jones@bedford.gov.uk