You are here: Home » News » Have your say on second phase of East West Rail

Network Rail is inviting people to have their say on plans to upgrade the railway between Bicester and Bedford, and Milton Keynes and Princes Risborough. A series of public exhibitions will take place between 21st September and 1st October 2015. Consultation material is also available online and in paper format at selected locations along the route in Bedfordshire, Buckinghamshire and Oxfordshire.
(See links below).

The proposals are part of the second phase of the East West Rail project which will link Oxford to Bedford, and Milton Keynes to London Marylebone via Aylesbury and Princes Risborough. 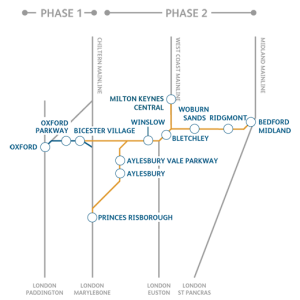 The work would involve upgrading and reconstructing underused and mothballed sections of the railway linking the Great Western, Chiltern, West Coast and Midland main lines north of London and providing a strategic east-west route connecting key centres of economic activity.

Once complete, this work will pave the way for exciting new journey opportunities including:

Residents are invited to find out more about the scheme at one of the forthcoming exhibitions and to provide their comments on the plans. They can also share their comments by post or online.

“East West Rail will be a tremendous asset to people and businesses in Oxfordshire, Buckinghamshire and Bedfordshire. The benefits it will bring – economic, social and environmental – just can’t come soon enough.

“With demand for rail travel is forecast to double over the next two decades, and this investment will transform journey opportunities for thousands of people.

“This consultation is an opportunity for people to review and comment on initial proposals. It’s an opportunity to show support for the scheme, or to raise any concerns for consideration before detailed designs are developed further. Input from local people is important in getting things right, so please get involved and have your say.”

“This is a great opportunity for people to come and learn more about the project and tell us what they think of our plans. It gives local communities the opportunity to influence how the project will be developed.”

This is the first round of public exhibitions and more detailed consultation will be carried out next spring.  Consultation material may also be viewed and feedback provided online. Network Rail hopes to submit an application to the Secretary of State for Transport in summer 2016 to gain the necessary permissions to complete the work.

Martin Frobisher, Network Rail route managing director, said: “I am really pleased to have delivered phase one of East West Rail. A new service from Oxford to Marylebone, from late October, will be a great new option for people travelling to and from the capital. As out attention now turns to the future, we want to hear your views in order to properly understand what’s needed for the next phase of this scheme.”

The first phase of the East West Rail project between Oxford and Bicester is well underway allowing Chiltern Railways to start their new service from Oxford Parkway to London Marylebone in October 2015.

Details of public exhibitions and locations of consultation packs in paper format are listed here.