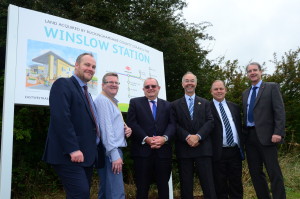 The train arriving at Winslow is one stop nearer following the purchase of land by Buckinghamshire County Council for a railway station on the outskirts of the town.

The County Council paid £900,000 for the 2.5 acre site, which will accommodate a station building, passengers’ car park and public transport hub.

It will all happen when track is laid on the much-campaigned-for East West Rail (EWR) linking Aylesbury, Milton Keynes, Oxford and Bedford.

The first phase of the Western Section, between Oxford and Bicester, is nearing completion, and train services from Oxford to London Marylebone are due to start running in December. Trains have been running from Oxford Parkway to Marylebone via Bicester Village since autumn 2015.

The contract for the second phase has been awarded to an alliance of Atkins, Laing O’Rourke, VolkerRail and Network Rail, for the detailed design, development and construction of the line between Bedford, Bletchley and Bicester, and Milton Keynes to Aylesbury via Winslow.

The new railway is forecast to boost regional gross domestic product by around £135 million and contribute to the public purse through tax revenues of £65m per annum.

The County Council’s investment in the land for Winslow Station is a major step towards making the railway a reality.

A delighted County Council Leader Martin Tett said the investment was an important milestone for east-west rail links. ‘This demonstrates that we’re very serious about East West Rail and the benefits it will bring to our residents and businesses,’ he said. ‘This is a fantastic opportunity not only for Buckinghamshire but also for the wider region, and it can’t happen soon enough.’

County Councillor John Chilver, who represents Winslow, said the station would transform travel opportunities for residents, and help to attract jobs to the town. ‘A railhead for Winslow combined with a new cycleway to Buckingham will help relieve our rural roads of some of the traffic, and be an enormous benefit to our communities,’ he said.

Mark Shaw, County Council Transport Cabinet Member and Vice Chairman of the East West Rail (Western Section) Joint Delivery Board, described it as a significant moment in the county’s transport history. ‘This isn’t just about building a new railway,’ he said. ‘This is about opening up Buckinghamshire’s public transport cul-de-sac to make travel easier to major centres across Britain. It holds the promise to support planned growth of 100,000 new jobs and 120,000 new homes along the East West Rail corridor.’

Board Chairman Rodney Rose, Deputy Leader of Oxfordshire County Council, said: ‘Local councils along the route are doing everything they can to get this very important line operating, and we’re working with Network Rail and the Department for Transport to help us get this moving as soon as is humanly possible.’

By the time the station opens, Winslow will have been without a railway connection for 50 years. ​ The aim of the East West Rail Consortium is to improve rail connections within the region by re-instating the former ‘Varsity Line’ between Cambridge and Oxford. This would enable train services to run from East Anglia through Buckinghamshire to Oxford and beyond, with connections to High Wycombe, London, and national mainline services to the north, west and south of England.

The missing link in this chain is between Bedford and Cambridge, where sections of the former railway line have been dismantled and land developed for other purposes. A corridor between Bedford – Sandy – Cambridge is the preferred option for the Central Section of East West Rail, following studies by Network Rail and the East West Rail Consortium that show significant economic growth potential that could be unlocked through new rail services.