You are here: Home » The East West Main Line 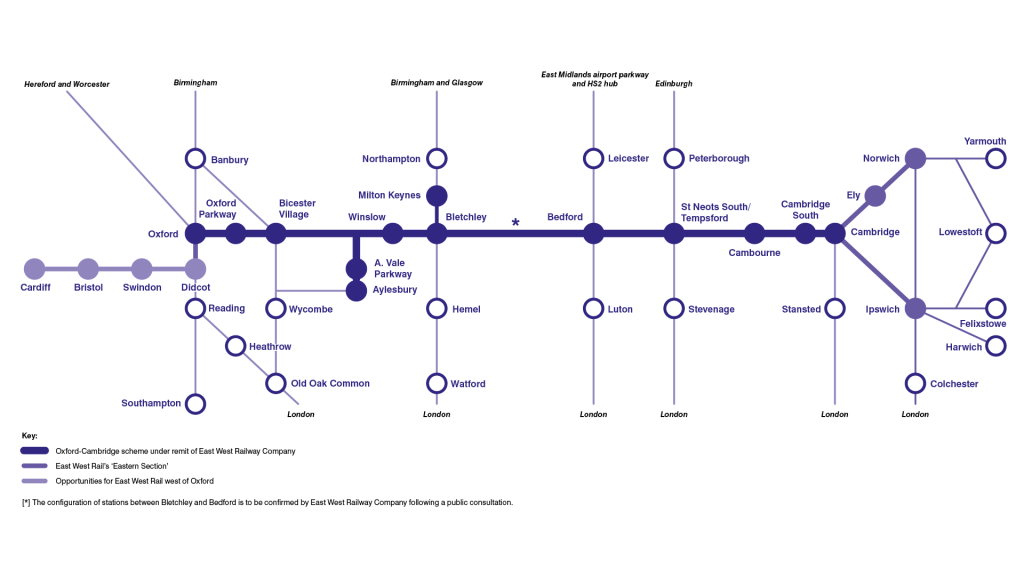 Delivery of East West Rail is now underway. Oxford and Bicester were connected in 2015, and construction work is now underway on the Bicester to Bletchley/Milton Keynes section, due to open by 2025.

Under the leadership of the East West Railway Company, Bletchley to Cambridge via Bedford is scheduled for completion by 2030, and through government support we can ensure that this timeline remains. We continue to reinforce the need for investment and delivery, at pace, of the Aylesbury-Milton Keynes link which was included in the scope of the original ‘western section’.

However, there is a need to go further in our strategic ambition for East West Rail which goes beyond the scheme currently being delivered.

Indeed, delivery of the current East West Rail proposal should be just the beginning of the transformation in connectivity.

The longer-term potential of East West Rail to support planned growth and encourage further shift in both passenger and freight movements on to the rail network will require additional investment in its capacity and capability. Now is the time to champion the wider strategic ambition for East West Rail.

The core focus for the East West Main Line is to achieve a step-change in east-west connectivity, linking Ipswich and Norwich with Cambridge, Bedford, Milton Keynes, Oxford and beyond that towards Swindon and onwards to Bristol and South Wales. However, the benefit of the East West Main Line lies not just in the improved connectivity between those areas it directly serves, but also in the opportunity created where the route crosses the radial main lines centred on London.

Removing the need for rail users to travel through London will additionally provide some relief to rail services on the radial main lines to/from the capital.

The creation of the East West Main Line will act as a catalyst for change. It is therefore important that the opportunities created by having improved access to rail services is used to shape future economic and housing growth proposals that are developed and brought through the planning system.